The article can be found here: Anne White article

This article is rich in detail and in its survey of the Persons Case. I recommend it as a good starting point to show how the case was significant. It highlights this particularly in two ways:
1) how it reveals the enduring and emerging issues of the times
2) how often history is constructed, and how this episode in Canadian history and those involved are significant because they created a meaningful space and narrative.

The article sheds light on the build up to the case, detailing the different legal and social deterrents women faced, but also some of the triumphs they had. It also sheds light on the important allies (men) these women had, who would go on to help bring these cases to different courts. It offers an important warning against complacency, and citing an editor of a popular magazine in 1929 who wondered if some would lose interest in political participation now that they had acquired what they thought was the pinnacle of political and legal rights for women. The article does well to show the process of this case, from its origins much earlier in 1921, to its connections within the first wave of feminism going on at the time.

Download File
This article acknowledges the historical significance of the Persons Case by focusing on the legal legacy of the case and the results for equality rights in Canada. Though far from a complete reversal of prejudice and discrimination, the Persons Case nonetheless did have important legal consequences––but not just for women. From a social justice perspective, this was an important case as it sought to identify the richness of meaning involved in words––particularly the word “equality” and the legal ramifications of understanding this word. L’Heureux-Dube makes the claim that the Persons Case greatly contributed to how judges would be able to use Section 15 of the Charter of Rights of Freedoms (when it was patriated in 1982), the section on equality of rights. She also speaks of the important concept of “interpretive lens of equality.” This concept helps judges step beyond just textual interpretation, but to also link their judgments to the social and historical context involved in discrimination. This, L’Heureux-Dube argues, was largely missing from the original Persons Case. The Persons Case was decided based on textual interpretation of what “persons” meant in the BNA Act. Interestingly, the Privy Council actually made no reference to gender discrimination or hinted at the wave of feminism and expansion of women's rights occurring at the time––though it was perhaps on the minds of the judges. Therefore this article is quite fascinating as it explores the Persons Case from a legal and semantic approach.

Download File
The following two sections I highlight are absolutely crucial. The first is Section 24 of the original British North America Act of 1867, and is the part brought forth in the Persons Case:

Section 24. “The Governor General shall from Time to Time, in the Queen’s Name, by Instrument under the Great Seal of Canada, summon qualified Persons to the Sen- ate; and, subject to the Provisions of this Act, every Person so summoned shall be- come and be a Member of the Senate and a Senator.”

The next section, as noted in L'Heureux-Dube's article, is the equality rights section of the Charter of Rights and Freedoms:

To be able to look at the exact wording and the foundations of our laws is important in social studies. Learning how to be at least moderately literate in legal writing is an important skill to teach students, and it helps open up our accessibility to a variety of historically significant sources. 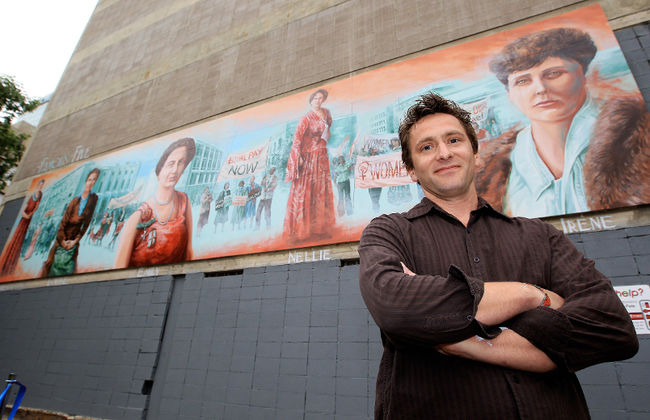 On July 3, 2012, a 44 foot by 10 foot mural created by Kris Friesen, was unveiled on the corner of 100 Avenue and 102 Street Edmonton to honour The Famous Five. Despite their complex histories that either the public has chosen to overlook or does not know about––the Famous Five are still being celebrated. Then-premier Alison Redford along with other local female politicians including opposition Liberal leader Laurie Blakemen, trumpeted the mural’s powerful representation. Blakemen was quick however to point out hat despite holding the posts of premier, official opposition leader, house leaders for other parties, deputy chair of committees––women still have a long way to go. Therefore the Persons Case, the legacy of the Famous Five, are fresh in the minds of many Canadians. Despite whatever personal foibles, as covered in the previous document, it is nonetheless important that this story is told, through artistic avenues and also educational values in our classrooms as well.